Are you looking to bang some hot BBW’s? That’s “big, beautiful women” for those not in the know. If that’s your flavor, you’ll want to check out this review. I take a look at an adult dating site that caters to ladies with a little extra cushion for the pushin’. Get our impressions below.

Is BangHotBBWs a Good Site?

Before joining this site I did a little web research of my own. There were a bunch of third-party reviews out there that gave it a bad review, but I decided to test it out myself.

I found that a lot of the reviews are justified. There are a lot of fake profiles, but it’s not as rampant as it is on other fake adult dating sites. There are real women looking to get laid on here. But in our opinion, there’s not a lot of great looking ladies to choose from. That said, I did get laid through this site so it is definitely possible, but you might have to lower your standards. 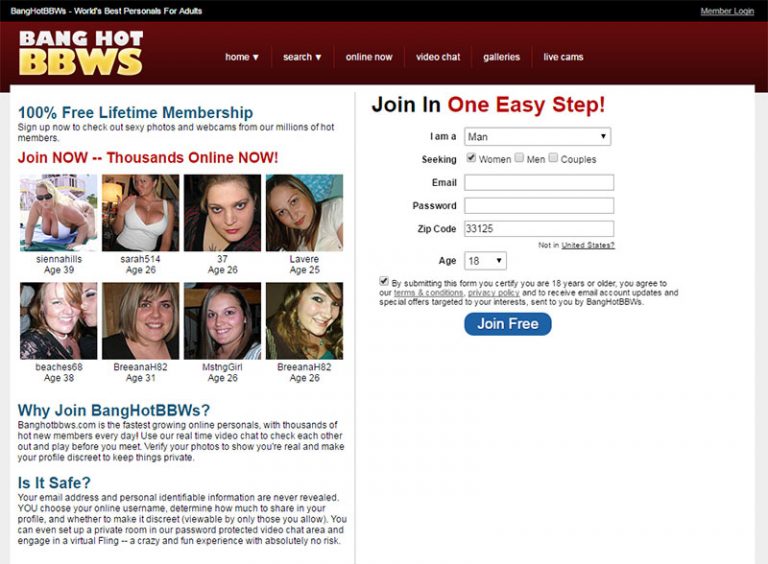 It’s my belief that the people who wrote a  bad review didn’t give the site enough time. Sure, seeing some fake profiles can scare you away, but if you’re patient you can find real women here.

If you sift through the crap on the site, you can find some hidden gems of big beautiful women. While typically I go after absolute smoke shows, like the girls I talk about over here on this site, you can’t deny that a heavier woman is going to have a set of monster boobs (and who doesn’t love that?).

It’s just like a lot of the other sites out there. You join by using your email address and creating a password. You fill out your basic profile information like gender, age, location. Pretty standard stuff.

At that point, you can browse the site and receive messages, but you can’t do any interaction until you become a paid member. This is the same as most sites we discuss here, so we weren’t too disappointed as it was expected.

I started getting messages right away from big beautiful women. While that is cause for excitement, it was kind of a letdown when looking at their profiles as they weren’t quite my type. I did send some messages to a whole bunch of women and 5 of them got back to us, so that’s a higher batting average than normal and indicative that the site isn’t loaded with fake profiles.

A couple of the interactions led to phone calls, and from there I planned a date with one of them after hitting it off over the phone. She was amazing – big ass and boobs for days. She was pretty flirty, knew what she wanted, knew what I wanted, so we didn’t beat around the bush.

We grabbed some drinks and had a good time there, so that’s when I suggested we go back to my place. I’ll spare the details, but she definitely showed me a good time. Loved slapping that big ol’ booty and squeezing those massive tits.

This site is decent, but not great. I did have some luck on this site and got laid, so there’s something to say for that. On the other hand, I had to weed through a lot of crap to find someone that interests me. If you put the work in, you can get something out of this site. That can’t be said for all the dating sites out there that are just scams.