Want to talk to Russian or Ukranian girls? CharmingDate might be the answer for you. I have tested out a lot of dating sites in my time, but CharmDate aka Charming Date is definitely unique. However, that doesn’t mean it’s a great dating site. It’s an international site that promises to introduce you to beautiful Russian and Ukrainian women with several features to have fun with.

It sounds great on paper, but there’s a catch. After some investigation I found out that, although you do get to interact with real women, it costs a lot of money to do so. Plus, they don’t actually hook you up with these women. The women are paid to talk to you, so it’s obvious that the goal of them communicating with you is not to meet you and hook up. They just want your money.

It’s a unique scam, but it’s a scam nonetheless. Much like other scam sites, they only want to take your money. Oddly enough they work with agencies trying to connect you with these Russian women. Now, you have no idea where these agencies are and what they do. For all we know, they could be escort agencies or phone chat companies. They may go about it a different way, but the motivation to take your money similar to what we’ve seen before. Check out more details in the full review below. 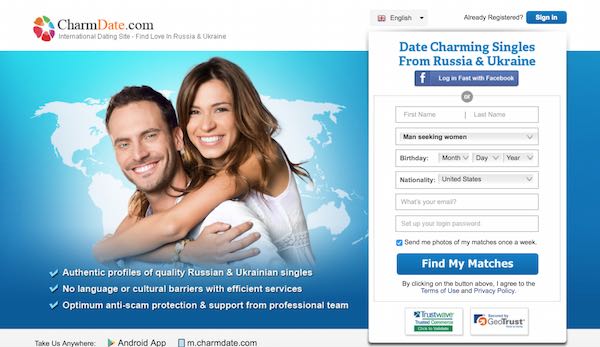 Here’s a shocker, CharmingDate is part of a larger network of international dating sites like LatamDate.com and ChnLove.com. All of them run the same type of scam that is outlined in their terms of service. Their terms state that they use independent agencies to provide women for you to interact with.

Russian and Ukrainian women basically connect with agencies and those agencies help them create profiles and translation services. I looked a little further into this and found out that the women and the agency each get a portion of the money that you pay. They actually split the money, so that the agency gets half and the woman gets the other half. That means that both have an incentive to keep you talking to them and interacting with them, but not to actually meet you.

It is a refreshing change for a dating site to offer real communications with real women because, let’s face it, most dating sites out there are scams with just a few exceptions. The sad thing is that you will end up paying a lot of money just to interact with a woman who never plans on actually meeting you. You have to pay for every single message that you send and read. You also have to pay by the minute to chat with her. Both get a portion of every minute of chat time, so they do their best to keep you talking and leading you on. They are more attracted to your money than you. It seems a little ridiculous to have to pay to communicate with a woman that you’ll never meet in your entire life.

I didn’t know that the women got paid to talk to me when I first signed up for the site. In fact, I was actually stoked at first. I actually got to talk to real women instead of the fake profiles and auto e-mails. It wasn’t long before my excitement wore off and reality began to set in.

I was talking to three different women, all of them beautiful in their own way. They were quite flirty and I had a nice time talking to them. I was weary about the per minute charge for chat and per message charge. It seemed relatively low at the times and I thought that I would eventually get to hook up with these women. I was so wrong…

I became suspicious when I started to feel like all 3 women were leading me on and they were all avoiding the subject of meeting or talking outside of the site. This is when I looked into it further and realized that the women were legit working for an agency that split the money I spent to chat with them.

Paying girls to chat with me really pisses me off. I’d like to join a few casual adult dating sites like these that will connect me with women I can actually bang.

CharmingDate actually has some pretty cool features that go a little further beyond your standard dating site. They provide things like Live Chat, Love Calls, Video Shows, E-mail. You are also able to send the women gifts and flowers as well as Virtual Gifts.

While these features are nice and you can interact with real Russian and Ukrainian women, it’s going to cost you a lot. This is a “pay as you go” site. You are only able to take advantage of the features until the money runs out. You know, kind of similar to making a collect call. You’ve basically got to pay for everything with this site.

They don’t have a phone number (which is concerning) but they do offer an email address as well as a physical address. It’s suspect given that the address is based in Hong Kong. WTF, I thought I was chatting with a Russian-based company? I guess the actual company is owned by Asia Maritus Limited.

In Conclusion – These Girls Won’t Date You

The bottom line is that CharmingDate connects you with Russian and Ukrainian women. However, you really have to be careful how much money you spend to interact. It can get expensive and before you know it, you’ve spent thousands of dollars. The first thing you need to realize is that it will cost you a lot to communicate with these women. Most importantly, you need to understand that the communications will never result in you actually meeting them. The Charmdate Russian girls may sound hot and they just might be but you’ll never get anywhere with them.